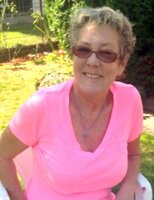 Sandra Janis Welborn went peacefully to be with the Lord, her dad, Lyle Symer, and her sister Teri, in Heaven on Wednesday, September 8. She was surrounded in love by her family. Sandy was a lifetime resident of the Pacific Northwest. She grew up in Edmonds and lived in Everett for the last 25 years. She touched the lives of countless people in her 30-plus years as an oncology nurse at Stevens Hospital. She is survived by her daughters, Nicole and Corrie; her grandchildren, Brandon, Rhiannon, Ryenn, Rylee, and Nicholas; her great-grandchildren, Mylee and Bodhi; her mom, Janis Symer; her four siblings: Karen, Kris, Lori and Scott; as well as a large extended family. Sandy was known for her incredible laugh. She had beautiful, big brown eyes and a talent for gardening and painting. She had an appreciation for music and dancing that was contagious. However, it was her role as Nana that fed her soul. Her grandchildren could do no wrong, and she was the first to say so. Her legacy to her favorite people is her unconditional love. Her ability to show love was unmatched and will be what her daughters and grandchildren hold closest in their memories. A celebration of life will be announced at a later date. Rest in peace, Nana. Have we told you lately?