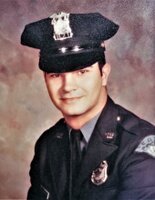 Richard Lee Johnson passed away peacefully in his home, with family members present, on the evening of October 20th, 2021. He is survived by his wife, Arlene, their 3 children; Cameron, Lance and Brandy, as well as 8 grandchildren and 5 great grandchildren. Born and raised in the Pacific Northwest area and married to Arlene for 54 years, Richard was a police officer for the city of Seattle for nearly 10 years before taking an early retirement from the force. He then went back to school and got his Master’s Degree in Zoology, beginning a second 10 year career as a teacher of Biology, at O’Dea High School in Seattle. He enjoyed teaching both in the classroom and out, with all he came into contact with. He was always ready with a life lesson to increase the knowledge of those around him. He found pleasure in writing, photography, watching Nascar and football. Richard was known as a devout Catholic, a loving Husband, a wonderful Father, and a genuinely kind hearted man. He will be remembered with love and deeply missed. A Funeral Mass will be held in his honor on Thursday, October 28th at 11:00am at St. Mark’s Catholic Church in Shoreline.