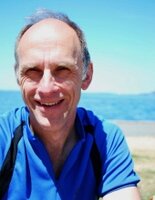 Robert lived in hope through his journey of MDS/AML enduring treatment that fought to save his life. On Saturday, October 23, 2021, just after midnight, he passed into heavenly glory with his family surrounding him. Robert’s story began April 18th in Seattle, the firstborn of Robert and Florence Kutrich. He lived with his family in Northgate area before moving to Edmonds. He graduated from Edmonds High School in 1971. Robert received his bachelors at SPC in 1976 with the unique distinction of creating his own with a blend of science and English to have a degree in Science Fiction. He married Lori in 1979 in Edmonds at Esperance Baptist Church. They made their home in Edmonds, but took a year soon after to move to Illinois for Robert to attend the graduate program in Communication at Wheaton College where he studied to develop his writing skill. Family and the Northwest drew them back home. After Adam and Luke were born, Robert was led to pursue his engineering degree from SPU in 1988 with Kari joining in during those university years. Robert spent the majority of his work career working for Washington DOT where he took on various roles related to his engineering degree. During this time life was full with raising children, enjoying their activities with them, church involvement, playing soccer and beginning his bike riding and kayaking adventures. His rich faith legacy is passed on to his surviving family: his wife Lori and children and spouses: son Adam (Annie), son Luke (Ashley), daughter Kari (Kyle) and granddaughters Loli and Mila. He is also survived by his two brothers Thom (Laurie) and Jim (Lynda) and dear friends. “I will continue to look heavenward”. RFK In lieu of flowers, donations can be made in honor of Robert to the <a href="https://www.mds-foundation.org/">MDS Foundation</a>, <a href="https://giving.younglife.org/s/?GiftType=Area&Amount=250.00&MissionUnitId=a2s410000002wmVAAQ&ClassCodeId=a2j41000000Nj93AAC&Frequency=Monthly&MissionUnitName=Sound%20Cities&AppealCodeId=70141000000hFjNAAU&ClassCodeName=Operating&Name=soundcities">Young Life (Sound Cities)</a>, <a href="http://www.tentofnations.org/support/">Tent of Nations</a>, or <a href="https://www.myugm.org/site/SPageServer/?pagename=donate_responsive_all_a&_ga=2.130246412.242107226.1635632671-812485085.1635632671">Seattle's Union Gospel Mission</a>.