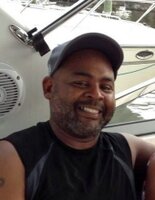 <center>An Eternal Memory Until We Meet Again Those special memories of you Will always bring a smile If only I could have you back For just a little while. Then we could sit and talk again Just like we used to do You always meant so very much And always will do too. The fact that you’re no longer here Will always cause me pain But you’re forever in my heart Until we meet again. -Anonymous</center> Jamol C. Smith was born in Brooklyn, NY on August 16, 1968 to Arthur and Renee Snith. Jamol was the second oldest to three siblings Troy, Solima and Arkim. Jamol grew up in the Bushiwick section of Brooklyn. In his early childhood and under the tutelage of his father-Jamol studied martial arts. This earned him a blackbelt in Jujitsu and an orange belt in Karate. Jamol had a lifelong passion for the Martial Arts and shared his knowledge of the arts with his nieces -- whether they wanted to learn or not. Jamol spent his childhood watching karate movies on Saturday mornings and would emulate these moves on whomever was present. He was very creative and would make his own karate weapons out of kitchen utensils and old sticks, in which he would try them out on his siblings, god-brother Anthony Ransom and little cousin Michael Bell Jr, much to their dismay. His passion for constructing and creating would extend into adulthood. After a difficult time in his youth, Jamol went on to work in the construction field. He earned a position as a journeyman, working in the shipyards in Norfolk, VA. In 2011, while employed with a Naval Contractor, General Dynamics Information Technology as a Pipe Fitter Journeyman, Jamol traveled to Seattle, Washington on assignment. While working in Seattle Jamol met the love of his life, Shacoya Caldwell. This union produced a son; on December 15, 2018 Jace Smith was born. Jamol was both very proud and protective of his family. He was overjoyed to be a father. This by far was his greatest accomplishment in life. He was a very dedicated and supportive Uncle. He adored his nieces; Nicky, Meika, Christine and Shamia as well as his great nephews and niece with all his heart. Jamol loved his family, immediate and extended, with all his heart and would make an effort to reach out to family members often. Jamol was outgoing and charismatic. To know him was to love him. Jamol made friends easily and was truly loved by all near and far, and by all who knew him. Jamol, affectionately nicknamed “Mal”, departed this earth on October 12, 2021. He leaves to mourn his only son Jace, Life Partner Shacoya, sister Solima, a great Uncle, and a host of cousins and friends. <center>A Letter from Heaven… When tomorrow starts without me and I’m not there to see. If the sun should rise and find your eyes all filled with tears for me. I wish so much you wouldn’t cry the way you did today, While thinking of the things we didn’t say. I know how much you love me, As much as I love you And each time that you think of me, I know you’ll miss me too When tomorrow starts without me Don’t think we’re far apart; For every time you think of me, I'm right here in your heart. - Alena Hakala Meadows</center>