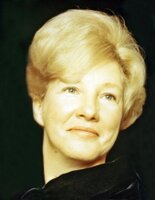 Ruth Margaret Crooks … wife, mother and grandmother, passed away peacefully on January 7, 2022 at the age of 91. Ruth was born to Reg and Mary Mills in Winnipeg, Manitoba on May 24, 1930. She was the great, great, great granddaughter to the founder of Winnipeg. She grew up in Winnipeg along with her younger brother Raymond. Upon moving to LA, California, with her best friend Arlene, she met and married the one true love of her life, Richard. They married on January 7, 1956 … the same day that she chose to leave this earth and return to Richard’s waiting arms. Ruth is survived by her daughter Pamela and son Matthew; her grandchildren: Lauren, Brett (Ashley) and Emily; her great grandchild Jayden and another little great grandchild on the way; along with loving nieces and nephews. Ruth was preceded in death by her parents, her brother Raymond and husband Richard (June 2015). A Funeral service will be held on January 20, 2022 at 10 a.m. at Holy Rosary Church in Edmonds; Interment will be at Holyrood Cemetery in Shoreline.