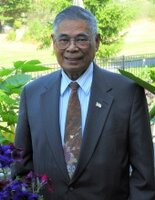 Tony Espejo was born September 1, 1931 to a single Mother, whose husband died before Tony was born. His Mother, Concepcion, only had a 3rd grade education. She made a living by having a cooking stall in the market in Baguio City in a northern province in the Philippines. Tony helped his Mother by washing dishes at the market. Tony knew privations growing up. For instance, there was a city law that no one can sleep in the market at night. Tony would hide from the policemen, when they made their rounds in the market. If the police found his hiding place, he was forced to sleep on the streets. From this experience, Tony gained a deep desire to improve his lot. He knew that the road out of poverty was through education. He would work his way through high school achieving high marks, which came from his keen mind, diligence, great motivation snd ambition. He even studied pre-Law at a university in Manila but he had to drop out to support his mother. He had a short stint in the Philippine Air Force, which ended when he retracted the landing gear of his airplane on the ground. Eventually, he enlisted in the United States Navy in 1956 in the Steward rating. Because they needed stewards in the Coast Guard, he was chosen at random to serve in the Coast Guard. His intelligence, diligence and attention to detail attracted the attention of flag rank officers, who wanted Tony to run the Officers' Ward Room. He was promoted to work with the Secretary of Transportation, the Honorable John A. Volpe, in Washington, D.C. Tony's career trajectory changed when he was allowed to take the Coast Guard wide Warrant Officer exam. His math skills were polished by being tutored by the staff of the Secretary of Transportation. He is the only Warrant Officer to be commissioned by the Secretary, who usually only commissions the Commandant of the Coast Guard. His stint in the Steward rating ended due to his commission. Tony was assigned sea duty aboard the (United States Coast Guard Cutter) USCGC Munro, where he rose to the rank of CWO3 (Chief Warrant Officer 3). Rather than leave Seattle, Tony retired from military service in 1978 and started his new career as a buyer for King County government. Using his G.I. Bill, Tony attended the University of Washington and completed his undergraduate degree in 3 years with a 3.6 GPA. He would continue his education while working at King County. He completed his Masters degree in Public Affairs from the prestigious University of Washington Evans School of Public Policy and Governance. Tony worked to help his fellow Filipinos as a Community Organizer, when he served on the Seattle Human Rights Commission. He served in various Community groups through the years, helping U.S. Coast Guard veterans and doing good works around the city contributing both his time and money to various causes. In his 70s, age caught up with him and he had to step back from his community service commitments. He and his wife, Joy, enjoyed entertaining guests at their home. After his retirement, Tony and Joy committed themselves to serve the Lord by giving wholeheartedly their time, talents and treasures to their church, St. Thomas More Parish in Lynnwood, Washington. Tony died 2/6/2022. He is survived by his wife of 62 years as of 2/24/22, Joy, and his two sons, Robert and Christopher. He is preceded in death by his oldest daughter, Donna, and his son, Gilbert.