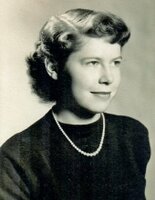 Donna Lee Allen was born on March 7, 1932 to E.M. “Jack” and Ruth Jessie Allen, in Wenatchee, Washington, which Donna always proudly noted is “the Apple Capital of the World”. Donna spent her young years in Monitor. Throughout her life, Donna was known by many loving nicknames including. “Donna Lee”, “Mama Dawgs”, “Grandma Donna and “Donna Mama”. Dale’s favorite was “Honey”. When Donna was in fourth grade, her family moved to Alderwood Manor, where her father was hired as principal of Alderwood Manor Grade School. Donna was a Girl Scout, a Rainbow Girl and a member of the Cedar Valley Juvenile Grange. She took the bus from Edmonds to Seattle to take piano lessons. Donna went to the “real” Edmonds High School (circa 1909-1990) and was a three-year Letterwoman. She was a Valedictorian of her class. She married her high school sweetheart, Dale E. Hoggins, and they attended Western Washington College in Bellingham where their daughters, Vicki and Kerry, were born. When Dale graduated, they moved to Edmonds, where Dale had obtained a teaching job. Their son, Bob (“Dawgs”) was born a few years later and that made their family complete. Donna started working part-time for the Edmonds School District in 1961 and she worked in various capacities until her retirement in 1997. When she retired from the school district, she told Dale she was retired from making dinner as well. She never came out of retirement. Donna loved music, especially the last few years. She continued to play the piano throughout her lifetime. Dale and Donna were best friends. They loved to dance and took ballroom dancing lessons and were in a square dancing group, the Checkerboard Squares. Dale and Donna were Husky fans and followed high school sports. After retirement, Dale and Donna were volunteers or members of the Lynnwood-Alderwood Manor Heritage Association, the Friends of the Edmonds Library, the Edmonds Museum, and the Edmonds United Methodist Church. She was preceded in death by her parents and her son, Bob. She is survived by her husband, Dale, her brother, Bob Allen, her daughters, Vicki Hoggins and Kerry Hoggins Dollins, her grandchildren, Shannon, Hillary (Erik), Whitney, and great-grandchildren, Mercedes, Anthony, AJ, Jenelle, Lilliana, Owen and Ayla. Donna was very friendly and made many life-long relationships from grade school on. Donna was kind, loving, sensitive, compassionate, progressive, particular, and she had a great sense of humor. Her intelligence, grace and incredible courage in the face of numerous health issues in later years will be remembered with love and which her family will seek to emulate. A Celebration of Donna’s life will be held at the Edmonds United Methodist Church, 828 Caspers St., Edmonds, on March 19, 2022, at 1:00 p.m. Although the mask mandate will be lifted at the time of the service, masks will be required for everyone’s safety. If you are unable to attend in person, her celebration of life will be streamed online at <a href="https://www.edmondsumc.org/">edmondsumc.org</a>. If you are unable to attend, the family would greatly appreciate cards sharing a memory of Donna. In lieu of flowers, donations may be made to the Lynnwood-Alderwood Manor Heritage Association, Edmonds Friends of the Library, the Edmonds Museum or the Edmonds United Methodist Church (United Methodist Women or the Kathlyn James Endowment Fund).