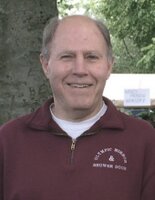 John Matthew McLaughlin was born March 20, 1942, in Seattle WA and passed away at his home on Camano Island, February 19, 2022, after a long battle with cancer. He lived in the Seattle area most of his life, graduating from Shoreline HS and attending Everett Junior College and the University of Washington. Prior to retirement, John was a glazier and worked for the family business, Winter’s Glass before starting his own businesses, JM Weatherstripping and Olympic Mirror and Shower Door. He left his mark on many of the homes and businesses in Edmonds. John was married to the love of his life, Pat. They would have celebrated their 45th wedding anniversary this year. They built a life filled with happiness, adventure and lots of cars! He adored his daughters, Jeannette Lobie and Jennifer McLaughlin. The girls thought the world of their dad. To them, he was Superman and could conquer anything and everything. John was a “gearhead”, known as “The Professor” or “Professor Chevy” to his friends. He was a Chevy guy through and through and his love of 55-57 Chevs was front and center in his life. He was a true craftsman and the cars he built and restored reflected that. He was also an avid and successful drag racer. We lost track of the number of cars he owned in his lifetime, but it was likely more than 100! He was also known as MacGyver because he could fix anything! With the mind of an engineer, he could take a paper clip, wood chip or whatever he had handy and solve the problem at hand. John was a truly good man who loved life. He was a force, with a strong sense right and wrong. He worked hard and played hard. He loved his family and was a loyal and fierce friend. He was Facebook before social media was invented; always reaching out to his friends and family to check in, wish happy birthday or just chat. His connection with people was remarkable. He is survived by his wife, Pat, daughters Jeannette Lobie (Rhett) and Jennifer, granddaughters Jade and Shandi and three great grandchildren, sister Karin Tymn (Tim), sisters-in-law Pam Soha, Peggy Weiss (Sterling), his Uncle Jack Winters, his “Edmonds cousins” Gwen Winters, John Winters (Jan), Patsy Anderson as well as other cousins, nieces and nephews. He was preceded in death by his parents Lurline Beth and Lloyd McLaughlin, and his brother George. “John, you were the best human being on this earth and the world is darker and smaller without you. We love you and miss you.” Private graveside service March 4, 2022, at Edmonds Memorial Cemetery. A Celebration of Life will be held for John, March 20, 2022, noon-4pm at The Camano Center, 606 Arrowhead Rd., Camano Island, WA 98282.