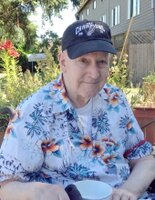 Born and raised in little New Rockford, North Dakota, Richard was big brother to a sister and four brothers. With their parents Obie and Violet, they lived on farmland, where Richard learned to drive tractors and care for livestock. Richard (known as Dick or Dickie back then) was a good student and athlete. He particularly excelled in basketball, playing forward on the high school team. Their best year was his junior year, when he started with Harry Anderson, Duke Hofstedt, and and Perry Price. When his family moved west before his final year of high school, the mayor of New Rockford offered to host Dick in order to support the basketball team. (Dick lived with Grandma Pfeiffer instead, graduating with his 30 classmates in 1956. During his college years, Richard worked during summer breaks as an inspector for Boeing and a carpenter for housing projects as well as Western Electric. He served a brief stint in the Coast Guard Reserves before being released to have knee surgery. Richard loved education and racked up several degrees; 1960 AA from Concordia Junior College in Portland, OR 1962 BA from Concordia Sr. College in Ft. Wayne, IN 1963 Studied at Concordia Seminary in St. Louis, MO 1965 BA from Concordia Teachers College in River Forest, IL 1974 Masters of Library Science from Indiana University in Bloomington, IN Richard taught high school English for three years before pursuing his master’s degree. Looking back on it 53 years later, he recalled that teaching "was very hard." Fortunately, he got to coach tennis and basketball at the high school, as well. Another consolation during the hard years of teaching was that he married his sweetheart, Patricia Astalos, to whom he was married for 33 years. Forever magnetized to books, Richard found his niche in libraries. He was a serials librarian at IUPUI and even represented World Book encyclopedias for a while. He regularly browsed the sale table at any large bookstore for items of interest to friends and family. If you hadn't seen him for more than a month, he probably had a new book to give you, thoughtful selected. The role Richard relished most, however was that of Helper. Always kind and generous, he leapt at any opportunity to lend a hand to a neighbor in need, especially helping families new to the country navigate government bureaucracy. He was active in the Lutheran church and taught Sunday school and confirmation classes. His grandchildren delighted him in his later years. The band concerts, dance recitals, and private harp performances were joyful highlights. During the pandenmic, he watched videos of his granddaughter's gymnastics competitions over and over. Richard took great pride in his children, Stephen and Beth, chauffeuring them to sports and music practice when they were young, bringing last-minute essentials like an ironing board or sewing machine to opening night of the latest school play or concert, and watching them succeed and stretch their wings. He sent his daughter the following quotation when she was serving in the Peace Corps: "The stronger you grow your chicks, the farther away they fly." Dad, we are proud of you, too. May your wings now stretch effortlessly and take you to peace. Mr. Wangen's family wishes to thank the staff at Park Ridge Care Center for their loving care of him in his final years.