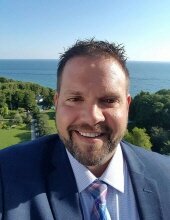 Geoffrey was born in Battle Creek, Michigan to Roger and Carol Mattens. He spent his formative years in Michigan with his parents and younger brother Adam. Growing up he became an avid Spartan fan, eventually becoming a third generation Michigan State University Alum, where he studied business and was a member of the Beta Theta Pi fraternity. He moved to Washington when he joined the Navy in 2000 where he was stationed on Whidbey Island; he proudly served his country as an aviation electronic technician.

Geoffrey graduated from University of Washington in 2017 with a degree in Community Psychology and went on to become a certified Peer Counselor and Opioid Use Disorder Specialist covering Eastern WA for the WA Recovery HelpLine.

Geoffrey became a father in 2002 to Lily Mattens and again in 2008 to Abigail Mattens. He loved spending time coaching their soccer and basketball teams, volunteering at their school, long car rides together, and exploring new music with them.

In his spare time he loved being outdoors, spending time with his family, especially spending summers in Michigan at Lake of the Woods. He shared his love of sports with his girls and attended many Sounders games with them.

Geoffrey is survived by his daughters Lily and Abigail Mattens, his parents Roger and Carol Mattens, brother Adam (Erin) Mattens, nephew Mason and niece Mya. Geoffrey is also survived by many aunts, uncles and cousins.

Visitation and Memorial Service for Geoffrey will be held at Beck’s Tribute Center, 405 5th Ave S, Edmonds, WA on May 6th at 12 noon. A private family burial will be at Holyrood Catholic Cemetery in Shoreline, WA.

In lieu of flowers the family requests that you consider planting a tree in memory Geoffrey’s name at A Living Tribute.

To send flowers to the family or plant a tree in memory of Geoffrey Mattens, please visit Tribute Store
Friday
6
May

Share Your Memory of
Geoffrey
Upload Your Memory View All Memories
Be the first to upload a memory!
Share A Memory
Send Flowers