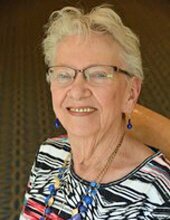 Sharon McFarland passed away quietly in her Mountlake Terrace apartment on the morning of February 7, 2022.

Born to Gerald and Marguerite Smither in Everett, Washington, in 1933, she attended Everett public schools. Her sharp intellect resulted in moving up a grade, and she graduated in 1950.

Sharon Smither met Charles McFarland on a blind date. As family lore records, she liked the lanky young man very much but wasn’t particularly smitten. Charles, on the other hand, told his mother the next day, “I think I met the girl I’m going to marry.”

The first date led to another, and Sharon’s heart quickly caught up with Charles’. On St. Patrick’s Day in 1951, they were married. It was a strong and loving union that ended only when Charles passed away in 2018.

The family moved often, particularly in the early years, and Sharon made new friends easily and helped her daughters learn to adapt and make new friends, as well. In those early years, she worked in retail part time for what she referred to as “pin money.”

After the girls were raised and out on their own, Sharon became a tax preparer for H&R Block. She enjoyed helping people to understand their taxes and uncovering deductions they weren’t aware of, and making new friends along the way.

This profession allowed her sufficient down time to travel. She and Charles bought an RV and enjoyed visiting friends and family and west coast beaches once tax season was over.

Church was core to Sharon’s life, and she was known to share her time and talents freely, ranging from sending a card of encouragement, to baking bread for communion, to serving as a Stephen Minister with Trinity Lutheran Church in Lynnwood.

Sharon has been placed next to her husband at Beck’s Restlawn Cemetery, Edmonds, WA. Memorial arrangements for close family are planned.

To send flowers to the family or plant a tree in memory of Sharon McFarland, please visit Tribute Store

Share Your Memory of
Sharon
Upload Your Memory View All Memories
Be the first to upload a memory!
Share A Memory
Send Flowers