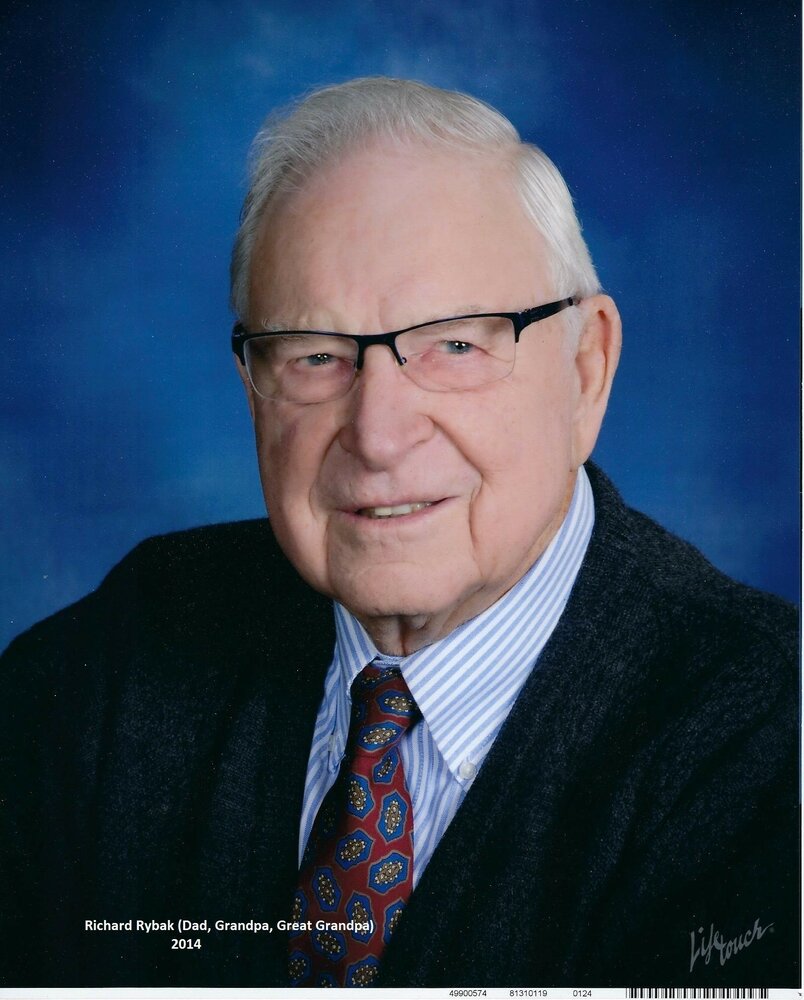 Richard "Dick" Rybak, 96, passed away peacefully surrounded by his family while still living in his Mountlake Terrace home on May 23, 2022. Anyone who knew Dick knew that he was the most loving husband, father, brother, and friend a family could have. Dick was predeceased by his wife of 65 years, Dolores. He was survived by his children Barbara Asher, Bruce Rybak, John Rybak (Geline), Judy Rybak, and Carol Halsey, his 12 grandchildren and his 13 great grandchildren and his 1 great-great grandchild, his 3 sisters Margaret Ann Bissell, Marian Clement, and Evelyn Reiling and by his very dear friend Lois "Mikie" Caslin. He will be deeply missed by all who knew him.

Dick was a veteran who served in the United States Navy during World War II as well as in the Air Force Reserves later in life. He was a patrolman and Special Agent for Great Northern RR and Burlington Northern RR and retired as a Regional Manager for the BNSF RR -- 33 years of dedication to the Rail Road.  Dick went on to have subsequent careers in school bus driving, tour bus driving, water well drilling, and Alaskan fishing. He was a private pilot and flight instructor, teaching many people to fly in his Cessna 150 over the years. Finally, Dick retired fully to tend his garden, travel, and host family gatherings until his final days.

One of the kindest souls on this planet, Dick worked tirelessly to support his family. He faced every challenge in life with strength, enthusiasm, and a sense of humor. He was proficient at Dad Jokes before they were part of the vernacular. He was a man of faith and he taught us the importance of family, hard work and doing what is right. Dick was a true role model who we will always look up to. He will live on forever in our hearts with so much love and cherished memories.

The funeral service and reception will be held at St. Pius X Parish on July 15, 2022 at 11am followed by the interment with military honors at Holyrood Cemetery at 1:30pm.

To send flowers to the family or plant a tree in memory of Richard Rybak, please visit Tribute Store
Friday
15
July

Share Your Memory of
Richard
Upload Your Memory View All Memories
Be the first to upload a memory!
Share A Memory
Send Flowers