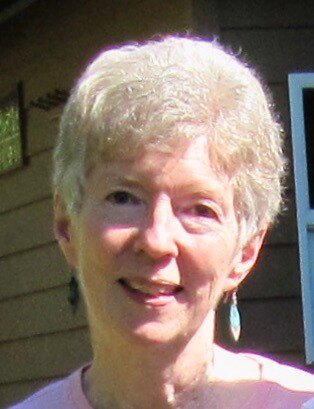 Jane Lindsey Simpson passed away on August 9, 2022, from the consequences of pancreatic cancer.  Jane was born on August 20, 1942 in Bryn Mawr, PA.  She was the daughter of James Milton and Gladys Larew Lindsey.  She attended Sutherland and Faulkner Schools for elementary and secondary education in Chicago, IL, graduating from high school in 1960.  She graduated from the University of California at Berkeley in 1964.  At Cal, she was a member of Eta Chapter, Gamma Phi Beta Sorority.  After graduation, she trained and worked as a legal secretary in San Francisco, CA, until 1968.  While there, she attended San Francisco State University to obtain a teaching certificate.

In the fall of 1968, Jane began teaching in the Monterey Peninsula School District at the George S. Patton Jr Elementary School at Fort Ord, CA.  The following year, she met a career army officer, Major Donald A. Simpson, and they were married at St. John’s Episcopal Chapel in Monterey on June 20, 1970.  During the next twenty years, Don and Jane lived at Fort Bragg, NC; Presidio of San Francisco, CA; Fort Ord, CA; Naval Air Station Keflavik, Iceland; Stillwater, MN and Lakewood, WA until Don’s retirement from the US Army at Fort Lewis in June, 1990.  Their son, Donald Jr, was born on May 6, 1978 at Fort Ord, CA.

In 1990, Jane began a thirteen-year career as librarian at Saltar’s Point Elementary School in Steilacoom, WA.  In 1992, she received her Master of Arts in Education degree with a reading concentration from Pacific Lutheran University.

After retirement in 2003, Jane volunteered at the Governor’s Mansion in Olympia and at the Washington State Museum in Tacoma.  Don and Jane moved to Edmonds in 2015.  In Edmonds, she volunteered at the Log Cabin Visitors Information Center and the Edmonds SnoKing Branch of the American Association of University Women.

Jane was an intelligent, talented, gracious woman who will be terribly missed by her family and friends.  At her request, there will be no services.  A gathering of family and friends will be held at a later date.

In lieu of flowers, memorial donations may be made to the Fred Hutchinson Cancer Research Center, Virginia Mason Foundation, Swedish Foundation, Edmonds SnoKing Branch of the American Association of University Women or to the charity of your choice.

Share Your Memory of
Jane
Upload Your Memory View All Memories
Be the first to upload a memory!
Share A Memory