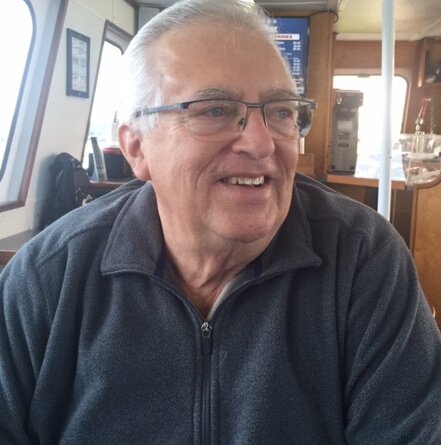 Fred was born in Seattle to Katherine (DeBlasio) and Karl Teppner on October 31, 1941, the second of three sons.  His childhood was spent in the neighborhoods of Beacon Hill, Montlake and Madrona.  He told many stories of growing up there, among them collecting crates of grapes from the train depot with his grandfather for wine-making, his adventurous school days and of his paper routes in Madrona and Madison Park, where he was chased by a dog who bit him and then ate his sandwich.  Although there were difficult times as well, he never let anything deter him.  After Garfield High School, he joined the United States Army and trained as a field radio operator and sharpshooter, and thereafter was deployed overseas.  He was stationed in Augsburg, Germany, when he met “the love of my life”, Lydia.

In 1966, Fred and Lydia married, and Fred began his career at The Boeing Company.  Son, Michael, arrived in 1967.  Jennifer was born in 1972, and Linsey came along in 1976 to round out the bunch.  Fred was a devoted dad who did not shy away from midnight feedings and changing diapers.  He coached his children’s soccer teams, cooked for St. Luke Parish’s Italian dinners, and helped his neighbors whenever they called.  Linsey fondly recalls the many swimming races in the backyard pool, "shaving" together, being taught to cook, how he always kept the yard in tip-top shape, and trips together to the local dump with a Baskin-Robbins treat on the way home.

Fred proudly worked at The Boeing Company for 47 years, where he made wonderful life-long friends.  While he worked on nearly every type of Boeing aircraft in his long career, he said the most interesting was time spent on the Lunar Roving Vehicle and an extended space program assignment in California, where the family enjoyed beautiful beaches and sunshine galore. Fred loved telling stories of the aircraft testing work, like static testing (bending the wings up until the break) and firing chicken carcasses to test plane engines.  It is worth noting, however, that Fred was not fond of flying, often reiterating that an airplane landing is just a “controlled crash.”  Despite that, he took many trips to Hawaii and various countries in Europe, including numerous visits to Germany, where he always felt at home.

In retirement, Fred loved spending time with his family at their cabin on Camano Island, where he cooked his famous breakfasts and barbecues, and enjoyed the beautiful views of the sound and mountains.  He always loved to hear and tell a good joke, enjoy a cold Rainier, and celebrate Seahawks victories (and groan at their losses).

Fred was a wonderful husband, father, grandfather, father-in-law, and friend.  He will forever live on in our hearts.

Rest in peace, my love, until we meet again.

In Lieu of flowers, please donate to The Ronald McDonald House Seattle.

Share Your Memory of
Frederick
Upload Your Memory View All Memories
Be the first to upload a memory!
Share A Memory