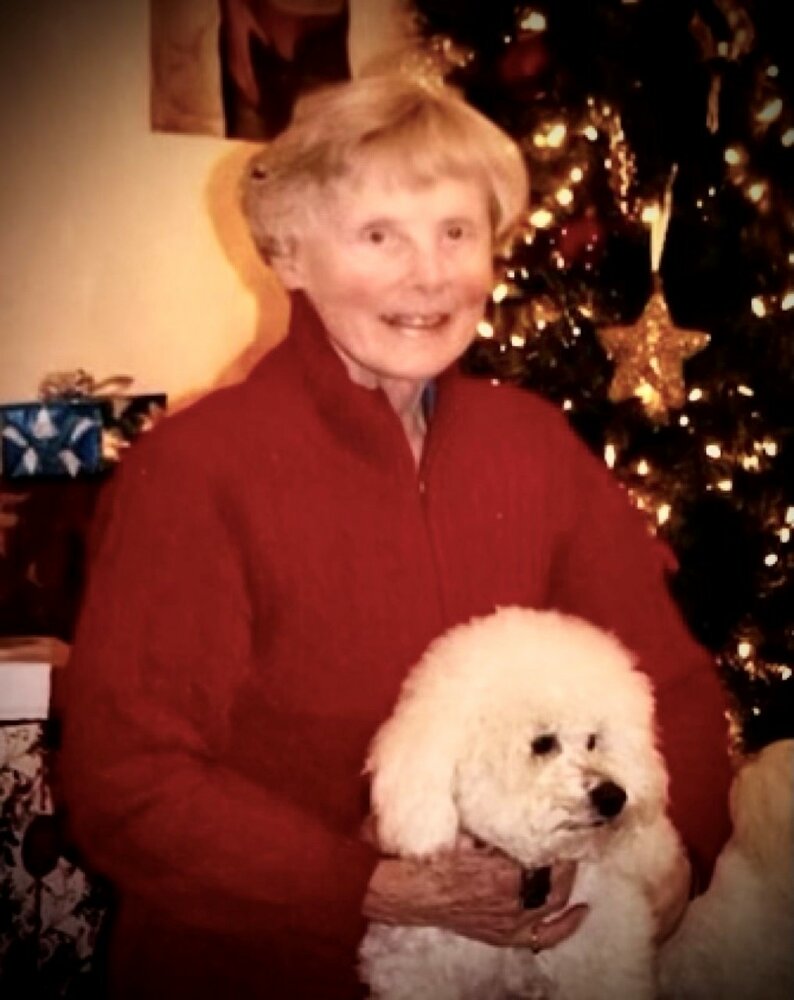 Doris was born on February 28, 1931 in Lynden, WA to Haagen Andersen and Esther (Nubgaard) Andersen.  She spent the first few months of her life, along with her two older siblings, Clarence and Beatrice, on a farm near Wiser Lake before the family moved to Ole’s Resort on Lake Samish, where her parents managed the resort until 1934. The family lived in Bellingham for several years and eventually, moved to Ferndale, where they lived on their family farm.

While attending Ferndale High School, Doris began working as an alterationist/ seamstress and became an expert in the craft over the years. She also operated the elevator at The Herald Building. She graduated from Ferndale High School in 1949 and married her high school sweetheart, Walter Alton, the following year. They had two daughters, Susan and Amy, during their thirteen-year marriage together.

Doris moved to Langley, on Whidbey Island, in 1963 to accept a live-in nanny position for a widower named Jim Stackhouse. They married one year later. The mother of two then became mother to eight, after adopting his six children.  They welcomed a daughter, Peggy, in 1965 to round out their brood of nine.  Doris never shied away from a challenge. Jim’s military deployments often spanned several months at a time and made it necessary for her to run the household and raise nine children on her own. She started operating a daycare out of their house to make ends meet. She made hot breakfasts and dinners every day of the week and sent lunches with every child to take on their walk to school. She maintained a large garden, and each child was assigned a small garden plot.  They were often recruited to pick berries in the woods surrounding their home, for the delicious pies she made. She taught her children how to bake, sew, and iron. She drove all of the kids to swimming lessons throughout the summers, made costumes for them to wear in the local parades, and always made sure s'mores supplies were packed during family camping trips. The kids enjoyed riding their family pony, Nancy, around the neighborhood and even downtown. Roller skating was something she encouraged through the hallways of the house. Skating was a favorite activity of hers throughout her life.

Two years after Jim retired from the Navy, their family moved to Bonners Ferry, Idaho in 1973. Doris and Jim grew a quarter-acre garden from which she canned fruit and vegetables every harvest. She dove into the responsibilities associated with creating a small farm. Homemade butter and ice cream came from the cows she milked every day and oftentimes, she made bread from scratch.

After twenty years of marriage to Jim, Doris returned to Bellingham, WA in the early 1980’s, where her siblings and their families had remained since childhood. She enjoyed country line dancing and began competing in pairs roller skating. She worked at The Bellingham Golf and Country Club as a pastry chef until marrying Paul Matz, a retired pharmacist from Ferndale, in 1984.  Doris transformed Paul’s Ferndale home into The Hilltop Bed and Breakfast, where she thoroughly enjoyed meeting and catering to guests from around the world.  Her handmade quilts adorned each bed and some of her recipes can even be found in various Bed and Breakfast cookbooks.  Doris was married to Paul until his death in 1994.  She eventually settled back on Whidbey Island after buying the historical home in Langley she had dreamed of owning since the 1960’s. She proudly lived there the rest of her life.

Doris had an industrious nature. She constantly took on projects around her home, yard, and garden. She was renowned for her pies and baked goods, making time each week to bake and deliver a cobbler or a pie to the volunteers who worked behind the scenes at the local soup kitchen.  She went back to school in her late sixties to become a certified nursing assistant and worked as an in-home caregiver for elderly and hospice patients. Doris had multiple quilts in the works at all times. She loved her family, sewed each of her children a quilt, and for as long as her fingers were able to get the job done, she continued to make every new grandchild a quilt of their own as well. She was very proud of her Norwegian heritage. She and her sister, Beatrice, sewed their own Bunads, the Norwegian national costume, made from fabric representing the region their family originated from. They purchased the fabric while on a trip to Norway they took together, to visit their beloved Norwegian relatives and the farm where their father lived. Their brother, Clarence, and several other family members have also visited there and many continue to carry on their scandinavian traditions. Doris was an avid reader, puzzle solver and loved playing card and board games. She always enjoyed attending her high school and family reunions throughout the years.

Doris’ ashes will be scattered at places she cherished. A portion of her ashes will be buried next to her brother, Clarence, at Green Acres Memorial Park in Ferndale, WA.  A celebration to honor her life will be held on what would have been her 92nd birthday, February 28th, 2023, in the Green Acres Memorial Park community room. She leaves a lasting legacy with those whose lives she touched and will be dearly missed by those who loved her.

Share Your Memory of
Doris
Upload Your Memory View All Memories
Be the first to upload a memory!
Share A Memory