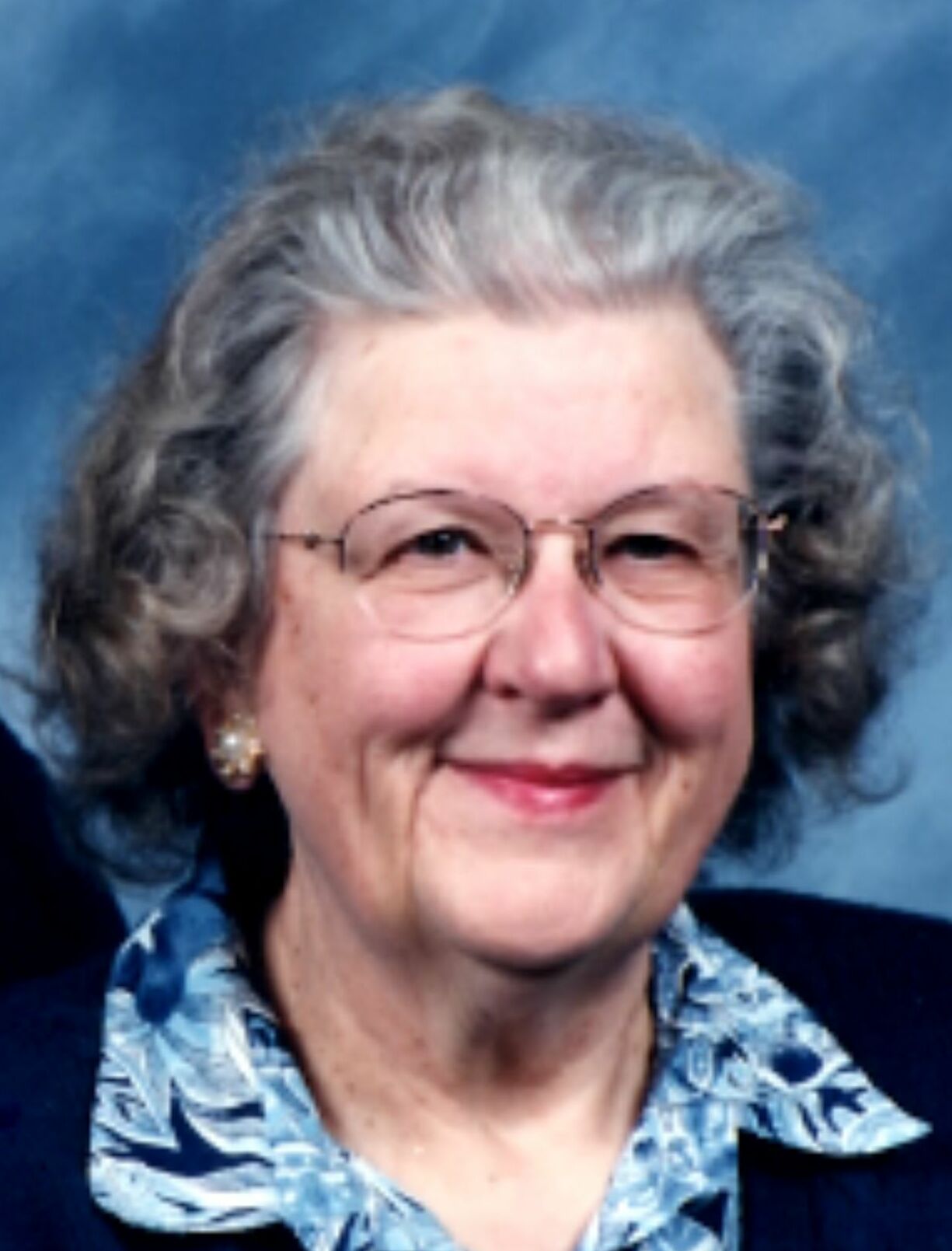 Karna Schultz Town was born May 10, 1930 to Danish immigrants Anton and Helga Sundsted on their family farm near Antelope, Montana.  Karna’s oldest brother, Erik, taught her the word “scissors” so she would know one English word when she started first grade. Karna’s other two older brothers, Knud and Carl, died shortly before and after she was born.  Karna had a younger sister Doris, and a younger brother Anton “Tony”.  Karna’s maternal grandmother, Helga Schultz, also lived with her family.  Karna loved growing up on the farm and enjoyed gardening and animals all her life.  She collected eggs, milked cows, and picked peas and beans. During her high school years, Karna lived in town near the high school and came home to the farm on weekends.   Karna played volleyball, basketball, and softball, acted in school plays, taught Sunday School, was the editor-in-chief of the high school paper, and her class valedictorian.  Karna graduated from Antelope High School in 1948.  At Montana State College Karna played the same intermural sports, lived in the Women’s Co-op with her sister Doris, and majored in Microbiology and minored in Chemistry.  She drove grain trucks and worked on the farm in the summer and babysat during the school year to pay for college.  She graduated from MSC (now MSU) in 1952 and then completed an additional year at the University of Minnesota/Minneapolis General Hospital to become a Medical Technologist and maintained her ASCP certification from 1954 to 1995.  Karna worked as a Medical Technologist for three years at a four-doctor clinic in Sidney, Montana.

In 1956 Karna moved to Seattle.  She worked at Swedish Hospital in hematology and microbiology and then at the UW Infectious Disease Lab at Harborview where she looked for “unusual things” that came through the lab and did original research on vancomycin and the disk method for antibiotic sensitivity testing with Dr. Kirby.  Next, she worked for Dr. Evans, the head of Microbiology at the UW, where she researched viruses like polio.  In 1959 She started work at the Washington State Department of Health Public Health Laboratory in the Smith Tower.  For the state Karna worked in enteric bacteriology, general microbiology, syphilis serology, virology, and did a research project on encephalitis.  During this time Karna was involved in many organizations including Ambassadors through University Presbyterian, Congregators, Scandia Folk Dancers, and Mountaineers.  Karna learned to ski at age 30.  Karna also traveled to Mexico, Scotland, England, Norway, Sweden, and Denmark during this time.

Karna started dating John “Jack” Town in 1964.  She had known who he was since they were both in a lot of the same groups.  Jack invited Karna to a lecture at the UW for their first date but neither was ever able to recall what that lecture was about.  Karna and Jack liked to hike, ski, and go sailing together.  They were married at Karna’s home church, Nathanael Lutheran Church, in Dagmar, MT on October 16, 1966.  Karna and Jack had three children, Jana, John Erik, and Bruce and Karna was a stay-at-home mom from 1968 to 1983.  While being a wife and mom Karna volunteered for many activities.  Karna drove soccer carpools, sewed ballet costumes, went on field trips, taught reading at school, timed for swim meets, attended PTA meetings, sewed on scout badges, baked countless cookies, and was the Sunday School Superintendent one year.  Karna made sure every birthday was special with a cake she baked and decorated herself and that every Christmas was extra special with Danish customs like rice pudding with a nut prize.

From 1983 to 1995 Karna combined both work and family together.  The state lab had moved to Shoreline where she lived so Karna started briefly in the water lab and then went to the virology lab where she became supervisor.  Karna encouraged the many teenagers who passed through her doors during this time.  Her mother had also been living with the family during the cold Montana winters for several years, so it was a busy house.  Karna and Jack attended many high school and college swim meets, band concerts, and graduations.  For vacations the family enjoyed motorhome trips to the ocean, skiing, hiking at Holden Village, sailing, including to Expo 86 in Vancouver, BC and trips to Montana.  Karna also traveled with daughter Jana, and sister Doris, to Denmark, Sweden, and England in 1985.  Karna retired in 1995 and spent her time gardening, volunteering at church, babysitting her first grandchild, and traveling with combinations of Jack, Doris, and Bruce.  She traveled to many states including Alaska and Hawaii, and to Canada, Mexico, Scandinavia, Northern Europe, Russia, the Panama Canal, and Israel, which was her favorite because she was able to see where Jesus lived.  In her later years, her favorite vacations were cruises to Alaska with her kids and grandkids and drives to Montana with Jana and Bruce to see Doris and Tony and many other relatives.

A visitation will be held from 5:00 to 8:00 p.m. on Thursday, January 12th, at Beck’s Tribute Center, 405 5th Ave S, Edmonds.  A memorial service will be held at 11:00 a.m. on Friday, January 13th, at First Lutheran Church of Richmond Beach, 18354 8th Ave NW, Shoreline.  Donations in memory of Karna may be made to First Lutheran Church of Richmond Beach and Montana State University Department of Microbiology.

Share Your Memory of
Karna
Upload Your Memory View All Memories
Be the first to upload a memory!
Share A Memory